Ruby is the most valuable variety of the corundum mineral species, which also includes sapphire. Rubies can command the highest per-carat price of any colored stone. This makes ruby one of the most important gems in the colored stone market.

In its purest form, the mineral corundum is colorless. Trace elements that become part of the mineral’s crystal structure cause variations in its color. Chromium is the trace element that causes ruby’s red, which ranges from an orangy red to a purplish red.

The strength of ruby’s red depends on how much chromium is present—the more chromium, the stronger the red color. Chromium can also cause fluorescence, which adds to the intensity of the red color.

The most renowned rubies, like those from Myanmar, the Himalayas, and northern Vietnam, typically form in marble. They’re found in layers that are distributed irregularly within the surrounding marble. Marble forms as part of the metamorphic (rock-altering) process, when heat and pressure from mountain formation act on existing limestone deposits. 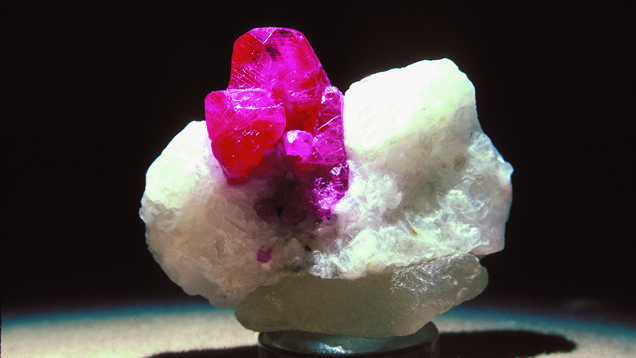 Marble has low iron content, so the rubies that originate in marble (called “marble-hosted” by gemologists) lack iron. Because of this, many have an intense red color.

In addition, rubies found in marble typically fluoresce red under ultraviolet light—even the ultraviolet light in sunlight. Fluorescence can make a ruby’s color even more intense and increase its value.

In other locations, rubies can be found in basalt rocks. Rubies from these sources can have higher iron content, which can make the rubies darker and less intense in color. Higher iron content in the chemical makeup of a ruby can also mask the red fluorescence, eliminating that extra glow of red color seen in marble-hosted rubies.