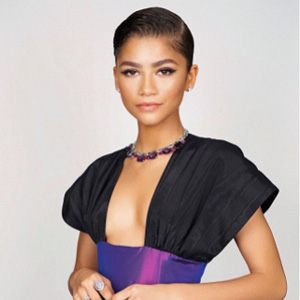 COVID-19 has all but ruined awards season, but the 2020 Emmy Awards actually happened last night—mostly virtually. Celebrities and filmmakers beamed in from their backyards and tastefully understated living rooms for last night’s show, while host Jimmy Kimmel doubled as a virtual switchboard operator for all the streaming video from an Emmy-decorated soundstage at L.A.’s Staples Center.

And though the Emmys’ producers sent a note to participants that the dress code was “come as you are, but make an effort,” most celebs opted for ritzy or all-out glam red carpet attire (more fun than yoga pants, so thank you). Or, in a few cases, statement-making fashion: Regina King (a winner for her starring role in HBO’s Watchmen, which took home 11 Emmys) and Uzo Aduba (a winner for her role as Shirley Chisholm in the FX miniseries Mrs. America) wore tees printed with Breonna Taylor’s name—a call to action to arrest the law enforcement officers who killed her.

Though social distance was the order of the evening, the power of jewelry—to reflect personality and mood, create a vibe, and add interest to ensembles—shone through several couch-bound cameos and backyard acceptance speeches.

Here are some of my favorite jewelry looks from TV’s biggest night:

Kerry Washington, nominated for her role in Little Fires Everywhere, went all out—even doing a mid-show costume change. Here she is in Chopard emerald jewels (via @luxurylaw). See the pieces up close and personal, below (courtesy of Chopard).Chopard Kerry Washington

Zendaya
Zendaya, the youngest person ever to win the Emmy for outstanding lead actress in a drama series—for Euphoria—in a decadent Bulgari amethyst and gemstone necklace (via @luxurylaw); below: a close-up of the Bulgari suite of jewels the actress wore (via @luxurylaw)
Bulgari jewelry Zendaya

Reese Witherspoon
Reese Witherspoon noted that her commute to this year’s Emmys (which she attended in her backyard) was the “easiest ever.” The actor/producer—whose Little Fires Everywhere was up for Outstanding Limited Series—wore a simple Louis Vuitton gown and Louis Vuitton jewelry. (via @reesewitherspoon)