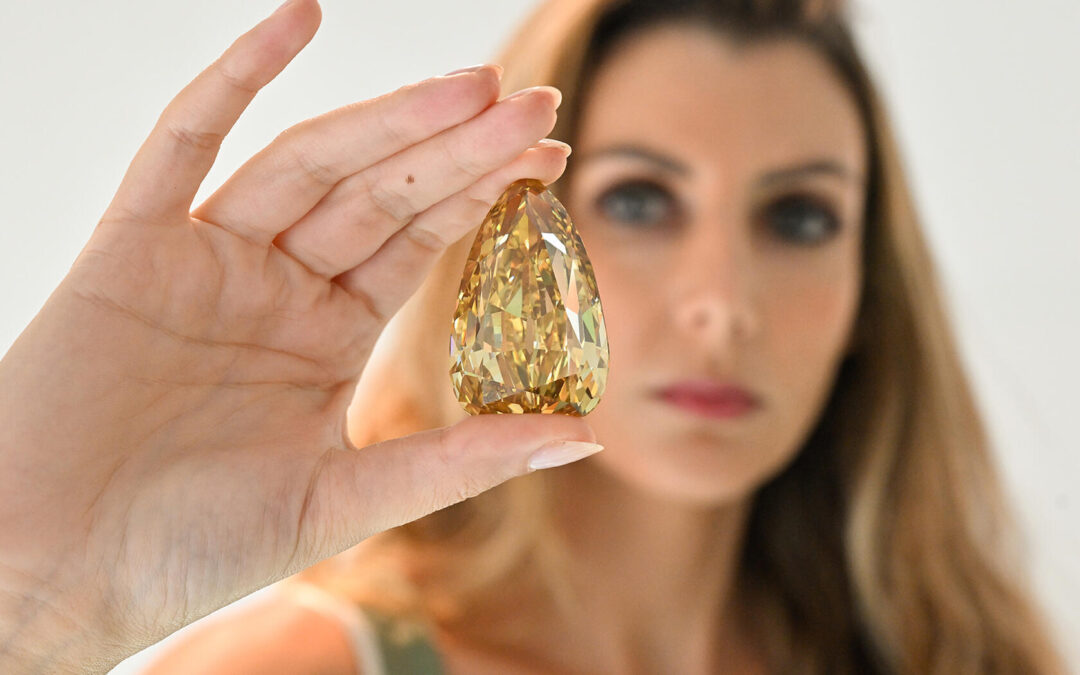 “The Golden Canary” is one of the world’s largest polished diamonds, valued at more than $15 million. “The Golden Canary,” a 303.10-carat fancy deep brownish-yellow diamond, will be a highlight of the Sotheby’s Magnificent Jewels auction in New York on Dec. 7, where it will be sold without reserve.
Dubai—News of big fancy color diamonds going to auction keeps rolling in.

Sotheby’s said it’s one of the largest polished diamonds in the world and the largest flawless or internally flawless diamond ever graded by the Gemological Institute of America.

Adding to its notability is its interesting provenance.

The Golden Canary’s story started in the early 1980s, when a young girl playing in her uncle’s backyard in the Democratic Republic of the Congo found it in a pile of rubble.

At the time, miners from the nearby Miba diamond believed the rubble to be too bulky to be diamond-bearing and discarded it, Sotheby’s said. Within it, there ended up being an 890-carat rough diamond.

The girl gave the stone to her uncle, who sold it to local diamond dealers.

The public got its first chance to see the rough diamond in 1984 at the Smithsonian National Museum of Natural History where it was on display alongside some of the world’s most notable diamonds and became a global sensation.

Over the next five years, it was cut into 15 finished stones, the largest of which was a shield-shaped 407.49-carat fancy deep brownish-yellow diamond formerly known as the “Incomparable Diamond.”

The Incomparable appeared in many museum exhibitions around the world, including “The Nature of Diamonds” at the American Museum of Natural History in New York in 1997, “Diamants” at the Muséum National d’Histoire Naturelle in Paris in 2001, and most recently in “The Nature of Diamonds,” an exhibition that toured The Royal Ontario Museum and the Houston Museum of Science in 2008.

The stone was eventually recut to maximize the depth of its color, brighten its hue, and improve its shaped, resulting in what’s now being presented as The Golden Canary.