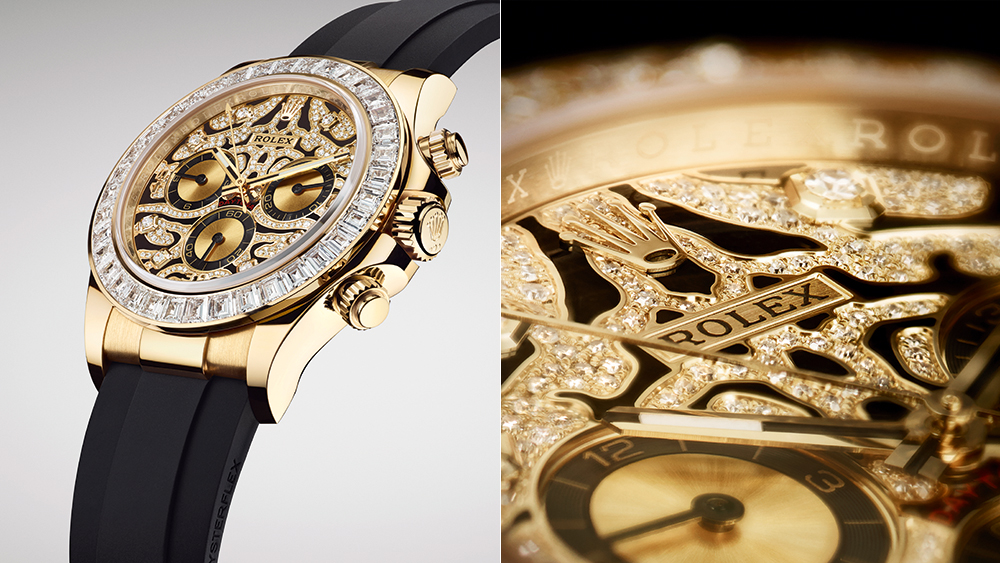 The Rolex Daytona is the world’s most recognizable sports watch: it’s named after the famous speedway and awarded to the professional race car drivers who win the rigorous speed tests there. It is also forever linked to the coolest race car driver of them all, Paul Newman, whose own Rolex Daytona sold for $17 million at auction.

But the Daytona is also the vehicle used to showcase some of Rolex’s most artistic métiers applications, including jeweling. This year’s version is almost as wild as the Leopard Daytona introduced in 2005, which was set with yellow sapphires. For the new piece, Rolex replaced the iconic tachymeter scale on the bezel with 36 trapeze-cut diamonds totaling 4.58 carats, and decorated the dial with swirls of black lacquer surrounded by 243 diamonds set in an abstract, snake-like pattern, punctuated by eight diamond markers set in yellow gold. The champagne-colored chronograph counters at 3 and 9 o’clock and the small seconds at 6 o’clock are nearly lost in the glitz, all contained within a yellow gold case, which is not subtle.

Otherwise, it’s a sports watch—and not just any sports watch, but the most sought-after sports watch in the world, with a long waiting list for models in the current collection. The Daytona is the model that housed Rolex’s first in-house chronograph movement, and has been continuously updated since. It now houses Rolex’s first in-house automatic chronograph caliber, the 4130, with a hairspring made of blue Parachrom, a proprietary paramagnetic alloy that Rolex says is up to 10 times more precise than a traditional hairspring. It carries a Superlative Chronometer rating, a Rolex standard that guarantees accuracy to −2 /+2 seconds per day, more than twice that required of an official chronometer. Rolex attaches a five-year guarantee to the movement. The watch is shock resistant and water resistant to 100 meters.

If the regular Daytona is rare and elusive, the decorated Daytona is even rarer still. Rolex describes it as a “unique take” on the sports watch, and that is an apt description. The absence of the tachymeter scale, the baguette diamond bezel and the decoration on the dial that overwhelms the chronograph counters, rids the watch of some of its classic sports vibe. But if you imagine the top subdials as eyes (as we do on dials nicknamed Panda), there is a certain grimace in the expression, which reminds you of just how tough this watch really is underneath all of its glitz.