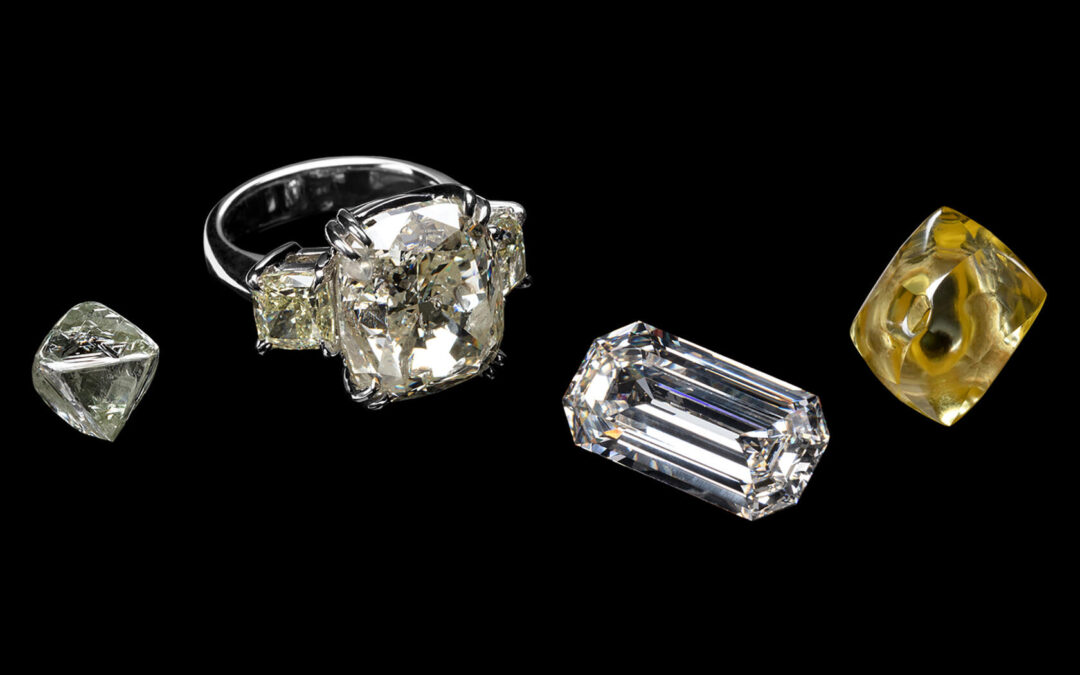 Two of the four stones on display are record holders.

The four diamonds displayed in the new “Great American Diamonds” exhibit at the National Museum of Natural History are (from left to right): the Colorado Diamond Crystal, the Freedom Diamond, the Uncle Sam Diamond, and the Canary Diamond. (Image courtesy Department of Mineral Sciences; photo by James Tiller and Brittany M. Hance, Smithsonian Institution.)
Washington, D.C.—The Smithsonian’s National Museum of Natural History has debuted an exhibit with a focus on American-mined diamonds.
“Great American Diamonds” opened Friday, June 10, displaying four top stones found in the U.S.
This includes the “Freedom Diamond,” the largest faceted diamond to be sourced in the U.S.
The cushion-cut stone came from a 28-carat diamond recovered from the Kelsey Lake Mine in Colorado in 1997. It’s now set in a ring.
The Smithsonian’s exhibit also includes the flawless emerald-cut 12.4-carat pinkish brown “Uncle Sam Diamond.”
Fashioned from a crystal weighing 40.23 carats, making it the largest rough diamond found in the U.S., the stone was discovered at the Crater of Diamonds mine in Arkansas in 1924.
The diamond was feared to have been lost but recently resurfaced in a private collection. “Great American Diamonds” will be the first time it’s being displayed in more than half a century.
Crater of Diamonds in Arkansas, which is now a state park and one of the world’s only diamond-bearing sites accessible to the public, and the Kelsey Lake Mine in Colorado are the only two diamond mines that have operated in the United States.
These two sites produced tens of thousands of carats of rough diamonds between them, but neither was commercially successful with both closing after less than a decade in operation.
The Uncle Sam Diamond and Freedom Diamond are now part of the Smithsonian’s National Gem and Mineral Collection. They came as gifts from Peter Buck and Robert E. and Kathy G. Mau respectively, and were donated to the museum’s national collection within a month of each other.
They are displayed alongside two other American diamonds from the museum’s collection.
The first is the “Canary Diamond,” a golden-yellow diamond crystal weighing nearly 18 carats also sourced from the Arkansas mine.
It was discovered in 1917 and acquired by famed civil engineer and mineral collector Washington Roebling, whose son donated it to the Smithsonian nearly a century ago.
The other is the 6.5-carat “Colorado Diamond Crystal,” which showcases the typical octahedral crystal shape of natural diamonds.