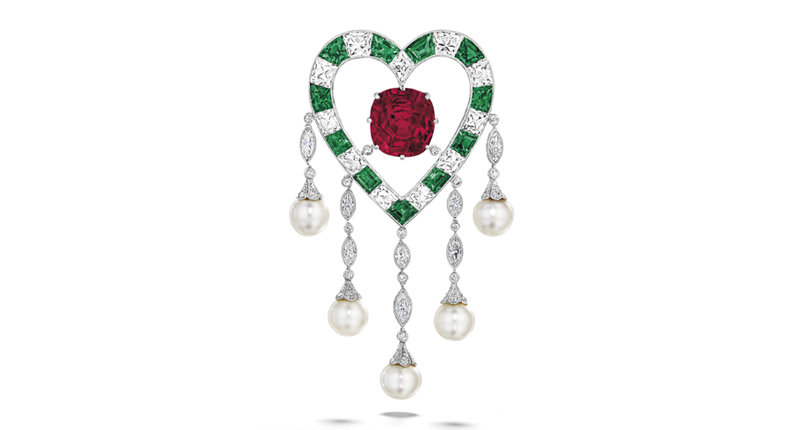 Estimated to fetch between $3.5 and $5.5 million, the 11.20-carat Burmese ruby, emerald, diamond and pearl brooch ultimately went for nearly $9 million.

The jewel (seen at top) was offered by the Virginia Museum of Fine Arts, along with “The duPont Emerald” featuring a no clarity enhancement, modified rectangular step-cut 9.11-carat stone. Set in a Tiffany & Co. ring, the piece earned $1.6 million, more than three times its low estimate.

Both jewels originated in the collection of Mrs. Alfred I. duPont. One of America’s wealthiest families, the duPonts made their fortune in gunpowder manufacturing in the 19th century.

Proceeds from the sale of the two pieces will benefit future VMFA acquisitions.

Other notable lots included the above fancy vivid blue round-cornered rectangular modified brilliant-cut 3.07-carat diamond set in a platinum ring, which earned $3.4 million, and the below 30.14-carat Kashmir sapphire and diamond ring, which sold for $3 million, less than its predicted $3.5-$5.5 million estimate.

A couple of notable diamonds fell within their pre-sale estimates, selling for $2 million.

The below diamond-encrusted Beats headphones from Graff, meanwhile, realized $110,000, falling within their pre-sale estimate.