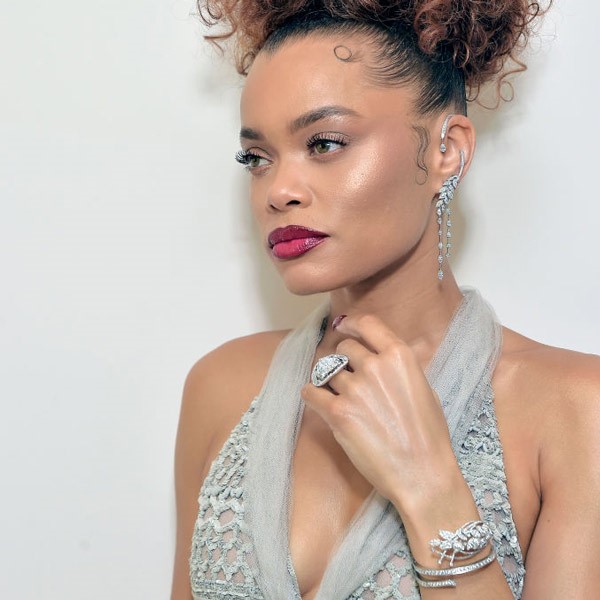 This year’s Golden Globes ceremony, like so many other “live” events that have happened during the COVID-19 pandemic, was a multicity affair savvily produced and televised to most closely resemble the show from “before times.” In this odd and iffy era, we recognize and appreciate the effort.

The evening’s rundown of sparkling jewels was equally mood-defining. The world may be on fire, but glamour still lives!

The virtual format saw most celebrities attend the show from their homes (which allowed for several canine cameos, including from Regina King’s slow-moving good boy, Cornbread, and Sarah Paulson’s tiny pup, who licked her face frantically).

But that didn’t stop most celebrities from going all out in dressing up for the evening. Instagram was awash in celeb photos snapped in sprawling backyards by makeup artists and stylists.

The residential settings created varied and interesting backdrops for the evening’s major diamond and gemstone styles, which inherently feel very formal and red carpet. Ultimately, all that panning around from mansion to hotel to mansion to soundstage gave the show a charming behind-the-scenes feel (and nice house, Kaley Cuoco!).

Here were our absolute favorite jewelry looks from the evening:

“I wish Jason Sudeikis had been wearing jewelry because Ted Lasso in a tie-dye hoodie will always be my favorite. But Jared Leto was a close second. The oversize Gucci pink flower worn on the lapel (also Gucci) of the coolest-looking guy in Hollywood was definitely eye-catching, and took the man-brooch trend to an entirely new level.” —Brittany Siminitz, contributing editor

“I, too, fell hardest for a man in a flower brooch last night. The man was actor Anthony Anderson, and the brooch was a massive diamond-studded flower from Chopard’s Haute Joaillerie collection, featuring a 19.83 ct. brown diamond briolette, 33.01 cts. t.w. diamonds, and 0.66 ct. t.w. brown diamonds set in 18k white gold. Anderson also wore an 18k white gold L.U.C Heritage Grand Cru timepiece and L.U.C cufflinks from Chopard. I love a man in haute joaillerie, and Anderson looked so striking in it.” —Emili Vesilind, senior editor

“I have loved Julia Garner since she had a small part in The Americans and of course fell even harder for her as Ruth Langmore when I started watching the Netflix show Ozark. A bonus is that she’s emerging as a memorable red carpet presence (with help from her stylist Elizabeth Saltzman). This Golden Globes 2021 look was an essay on luminous, low-key vintage glamour. But my eyes went straight to the cuffs: Verdura! They are the jeweler’s most beloved signature, and Garner wore a different version on each wrist: a No. 79 one-of-a-kind black jade cuff with a large baroque pearl surrounded by two rows of 48 old-mine diamonds; and a black and white 80th Anniversary Fulco cuff with a black briolette diamond, white diamonds, white and Tahitian cultured pearls, and black enamel and gold. Garner also wore black enamel, gold, and white topaz Maltese Cross ear clips. The jewels topped off her Prada gown, which was pure 1930s starlet at a dinner party, perhaps one that Duke Fulco di Verdura himself was attending. As Garner-as-Ruth says in season 3 of Ozark, ‘Come and get you some!’ ” —Amy Elliott, contributing editor

“Andra Day won Best Actress in a Motion Picture, Drama, for portraying Billie Holiday in The United States Vs. Billie Holiday, and she was every bit the winner in her peekaboo gray Chanel Haute Couture gown. But her jewelry, also from Chanel, was especially magnificent: Chanel Brins de Diamanta earrings, Legende de Blé’ bracelet, and a mash-up of the Commanding ring, Lion Astral ring, and Coco Crush mini rings. The overall effect was pretty magical.” —E.V.