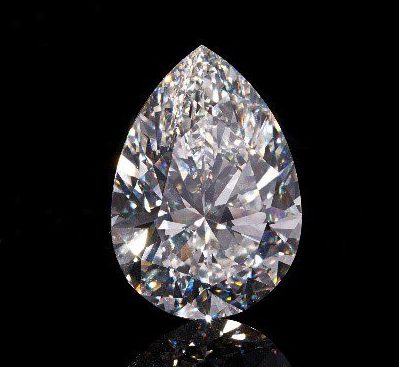 Christie’s, the legendary English auction house founded by James Christie in 1766, will host an auction this spring for a 228.3-carat diamond nicknamed “The Rock.” The white diamond is the largest to ever go to auction and has an estimated worth of between US$20 and US$30 million. Rahul Kadakia, International Heald of Jewellery for Christie’s told Robb Report that he sees “The Rock” as a ‘unicorn’ and confirmed that it is the largest white diamond to reach auction in Christie’s 256 years of existence. The diamond will be on the block on May 11th in Geneva.

Previously, the largest white diamond auction record was a 163.41-carat diamond, which sold in November 2017 at Christie’s for US$33.7 million. While “The Rock” may not top the November 2017 figure, it remains possible.

Kakadia told Business Tech, he believes there is a ‘great appetite’ in the diamond market currently and that the per-carat price of approximately US$88,000 is extremely appealing to collectors. “With the market the way it is—in 2021 there was a huge resurgence both in the art market and the jewelry market—the second owner approached us and said, ‘How would you feel about marketing this for us at public auction?’”

The pear-shaped diamond, which sits the size of a chicken’s egg, was mined approximately 20 years ago in South America. Initially, Christie’s was a part of the gems’ initial sale to a private collector shortly after its discovery.

The history of expensive gems going to auction is quite interesting. In 2013, Christie’s sold a 102-carat white diamond on the block for $26.7 million.

Other impressive gems include “The Pink Star” formerly known as the Steinmetz Pink, which holds the Gemological Institute of America record as the biggest flawless Vivid Pink ever sold. The diamond, which only took approximately five minutes to auction, went for a whopping US$71.2 million. The gem weighs 59.6 carats and was mined by De Beers in 1999. It was reported to weigh 132.5 carats in its raw form.

The Oppenheimer Blue Diamond is an extremely rare blue diamond that weighs 14.62 carats, making it the largest vivid blue diamond to sell at an auction house. In May 2016, it went for US$57.5 million, a staggering amount for the rectangular-shaped diamond.

“The Graff Pink” is an emerald cut with fancy pink color. The diamond weighs 24.78 carats and sold for the price of US$46.15 million in 2010. The Gemological Institute of America classified “The Graff Pink” as Diamond Type IIa, placing it in the top 2% of the world’s most coveted diamonds, the diamond is considered the most chemically pure with exceptional optical transparency.

The Wittelsbach-Graff Diamond is a 31.06-carat Fancy Deep Grayish blue diamond that has a history that goes back to 1664 and has been owned by royalty, lost, recovered, and then sold through auctions. It was sold in 2008 for US$24.8 million and recut to enhance its color and grading.

The Chloe Diams is an 84.37-carat colorless brilliant-cut diamond sold for US$16.2 million in 2007 at Sotheby’s in Geneva. The diamond has an intriguing history, originating in Angola, and sadly is linked to the brutal civil war and blood diamond controversy, which led to the rise of lab-grown diamonds.