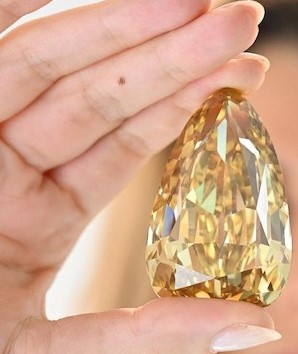 The Incomparable Has Been Recut Into The Golden Canary

On Dec. 7, Sotheby’s Magnificent Jewels auction in New York City will sell the 303.3 ct. Golden Canary, the largest internally flawless diamond ever graded by the Gemological Institute of America.

In a risky move, the famed gem is being sold without a reserve, so bidding starts at $1. Sotheby’s expects it to fetch more than $15 million.

The fancy deep brownish–yellow diamond was cut from the Incomparable, which weighed 407.5 carats, and for years was considered the third largest polished diamond in the world. While the Incomparable was a shield shape, the new Golden Canary has been recut into a classic pear.

According to a Sotheby’s statement, its owners decided to “recut the Incomparable to maximize the depth of its color, brighten its hue, and improve its shape.” The new cut also lowers its weight by more than 100 carats.

The Incomparable was reportedly found in the 1980s as an 890 ct. rough by a little girl in the Democratic Republic of Congo in a pile of rubble in her backyard. The girl gave the diamond to her uncle, who sold it to local diamond dealers.

It’s had many reported owners over the years, including De Beers and Donald Zale, former chairman of Zale Jewelers, as well as New York City cutters Marvin Samuels and Louis Glick. In 2013, it was set into a Guinness record–winning necklace by jeweler Mouwad.

The Incomparable has appeared in many museums. It was first displayed in its rough form at the Smithsonian National Museum of Natural History in Washington, D.C. It has since appeared at the American Museum of Natural History in New York City, the Muséum National d’Histoire Naturelle in Paris, and most recently as part of The Nature of Diamonds, an exhibition that toured the Royal Ontario Museum and the Houston Museum of Science in 2008.

Said the GIA’s monograph on the diamond, quoted in the Sotheby’s statement: “The re-cut of the Incomparable to the current 303.10 carat pear modified brilliant is to look at the diamond as new; a re-creation bringing to bear the advances in technology, computer modeling and visual evaluation available today. Everything from the orientation of the stone to its shape and cutting style has been considered.”