The Origin of Wedding Rings 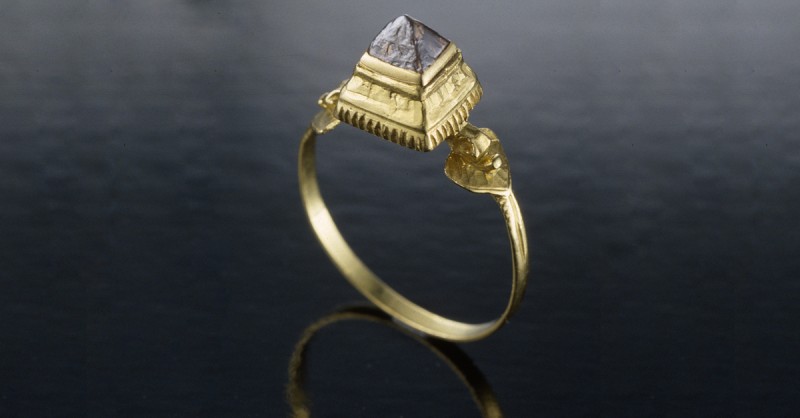 The origin of wedding rings is a fascinating one. The tradition of exchanging rings dates back 3,000 years, while the first diamond wedding ring was recorded in the will of a widow who passed in 1417. Why are rings, especially diamond rings, the ultimate symbol of romance?

It was the Egyptian pharaohs who first used rings to represent eternity. That’s because a circle has no beginning and no end, and reflects the shape of the sun and the moon, which the Egyptians worshipped. The Egyptians also thought that the open space in the middle of a ring represented a gateway to the unknown. The Egyptian ouroboros (oor-uh-boor-ros) rings portrayed a serpent swallowing its tail, representing the eternal cycle of things. The ouroboros is one of the oldest symbols in the world, and its name means “tail devourer” in Greek.

This modern ouroboros ring features a snake with sapphire eyes and diamonds set in its tail. Courtesy: 1stDibs.

When Alexander the Great conquered the Egyptians, the Greeks adopted the tradition of giving rings to their lovers to represent devotion. Many of these rings depicted Eros or Cupid, the god of love. When the Romans conquered Greece, they picked up on this tradition and began using iron and copper rings in marriage ceremonies. The iron rings sometimes had key motifs to symbolize that the wife now had control of the household goods. By 2nd century CE, however, most rings were gold.

This gold key ring from ancient Rome dates back to the 4th century. The Greek inscription Πουλχρης (Poulchrīs), which means “beauty’s ring,” praises the recipient as the most beautiful of women. Photo: Richard P. Goodbody Inc. (CC0 1.0)

From the 3rd and 4th centuries CE onwards, gold rings became more luxurious in style, flaunting the giver’s wealth. The fede ring, which showed two right hands clasped together, representing friendship, partnership and the marriage contract, were in vogue during this time. This design was rendered in gold and often carved as intaglios into gemstones such as onyx, carnelian, garnet or amethyst. Even later, Romans began personalizing their rings by carving portraits of themselves into their rings.

Ancient Egyptians believed that the ring finger, or the fourth finger of the left hand, contained a “vena amoris” or “vein of love” that led directly to the heart. The Romans adopted this belief and wore wedding rings on their ring finger. Although their belief isn’t anatomically correct, the tradition of wearing rings on the ring finger continues to this day. Both Roman fede and portrait rings were popular in Medieval Europe. Around the 1600s, fede motifs began to be incorporated into gimmel rings—rings with two, or sometimes three, interlocking bands. Lovers each wore a band during the engagement period. During the wedding ceremony, the groom placed his band on the bride’s finger, uniting the wedding bands into a matched set. The complete ring showed two right hands clasped together.

Around the 1600s, the fede motif evolved into the Claddagh ring, which showed a pair of hands holding a heart. Gimmel rings with the Claddagh motif often had a third center band showing a gem clasped by two hands. Poesy rings rose in popularity during the Renaissance and Elizabethan eras. These rings were inscribed with poetry inside or outside the band of the ring.

Puritans in colonial America considered jewelry frivolous. Puritan husbands therefore gave their wives thimbles instead of rings. After brides used their thimbles to sew clothes and textiles for their new home, they could then saw off the tops of their thimbles to create rings.

The oldest surviving diamond jewelry dates back to 300 BCE. The first known diamond ring dates back to the late 100s CE and was found in Rome. Diamonds back then were uncut and valued for their hardness rather than brilliance. The first recorded diamond wedding ring dates back to the late 1300s or early 1400s when it was left by an English widow in her will. A poem written about the 1475 wedding of two Italian socialites reads: “Two wills, two hearts, two passions are bonded in one marriage by a diamond”.

The first famous diamond engagement ring was given in 1477 by Archduke Maximillian of Austria to Mary of Burgundy. The ring is said to have been made up of small flat diamonds that spelled out Mary’s initial, M, a fitting gift for the future duchess who was the most eligible bachelorette of the time.

These two portraits, painted at different times, show the Holy Roman Emperor, Maximillian I, and his first wife, Mary of Burgundy. Public Domain This diamond cluster ring dates back to the late Victorian era and is set with 1.20 carats of old cut diamonds. Courtesy: 1stdibs.com

In Medieval England, getting married was remarkably simple. All the couple had to do was to offer each other their ‘present consent.’ Often, this consent was expressed through the giving and accepting of an object called a ‘wed,’ and this ‘wed’ was often a ring. Thus, a ‘wedding’ was a ceremony where a man offered a woman a ring and she accepted it. This became the norm in the 8th century. Confusion about the legitimacy of weddings were common, however. Since witnesses and clergymen weren’t required to be present at the wedding, one or both of the couple could later deny that a wedding had taken place. Thus, in the 12th century, the Christian church declared marriage to be a holy sacrament and established a church ceremony. Rings were a part of the ceremony, and it became the rule that no man should place any type of ring on a woman’s hand unless he meant to get married. Before this, rings did not always signify marriage. They were often given as tokens of devotion or to represent betrothal. It is possible that two different types of rings emerged when the church codified marriage: the more personal engagement ring and the church-sanctioned wedding ring.

How did diamond engagement rings become a tradition?

Up until the 1940s, diamonds were just one among numerous gems used as engagement ring stones. Their wild popularity is mainly due to De Beers, the diamond giant that controlled the majority of the world’s diamonds at the time. When people stopped buying diamonds during the economic downturn of 1930s, De Beers launched an epic marketing campaign.

By giving Hollywood actresses diamonds to wear in their movies, De Beers made diamonds glamorous symbols of romance, and by recruiting Pablo Picasso and Salvador Dali to illustrate their ad posters, De Beers communicated that diamonds are works of art. In 1947, De Beers introduced the advertising slogan “a diamond is forever.” And in 1953, Marilyn Monroe made “diamonds are a girl’s best friend” a household phrase. By the 50s and 60s, diamond culture was in full swing. Giving expensive diamonds was a man’s way of showing a woman that she was “worth it.” It was also his way of demonstrating his earning power. Through De Beers’ marketing efforts, the percentage of United States brides who received diamond engagement rings jumped from 10% in 1939 to 80% in 1990. After De Beers began promoting diamonds in China, the percentage of Chinese brides who received diamond engagement rings jumped from nearly none in the 1990s to more than 50% in 2019.

What do wedding and engagement rings represent now?

Engagement and weddings rings, in the past as now, symbolize commitment, love and devotion. In the past, wedding rings signified a promise or contract between a couple and their two families. They were also tokens or even security deposits that showed a man’s promise was “good as gold.”

In recent decades, weddings rings have evolved into statements of individuality and partnership that are worn by both genders. Both wedding rings and engagement rings are now wedding staples, not just in Western countries, but in any country where couples want an outward token of their love–and some more sparkle in their wardrobe.