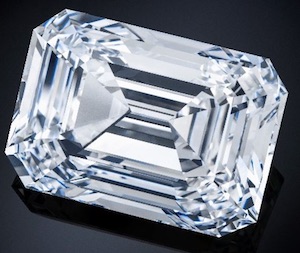 The next Christie’s auction promises a spectacle.

The diamond is expected to fetch between $13 million and $19 million, Christie’s said.

The mega-gem is the largest stone ever to have been cut in Russia. It was derived from a 207.29 ct. rough unearthed by miner Alrosa in 2016, at the Zarnitsa kimberlite pipe in the Sakha Republic in the northeast of Russia. Sakha is the home of the first diamond deposit discovered in Russia.

The diamond was cut by the Diamonds of Alrosa cutting factory in Moscow. Between the preparation and actual cutting, the entire process took 20 months.

Alrosa settled on an emerald shape because it allowed the company to present what it calls “the perfect geometry of the diamond.”

“Emerald cut is incompatible with any imperfections, as it allows the observer to gaze endlessly into the clear, unobstructed depths of the gem,” said a statement from Christie’s. “It requires the initial diamond to be perfect.”

This “exceptional 100.94 carat, colorless, emerald-cut diamond displays a breathtaking performance, which is a natural wonder revealed by human hand,” said Sergey Ivanov, CEO of Alrosa, in the same statement. “[It has] astonishing size, combined with impeccable color and quality, characteristics, and flawless provenance guarantee.”

The stone will be on public display on May 1 and 2 in Taipei, Taiwan, and from May 8 to 12 in Geneva.