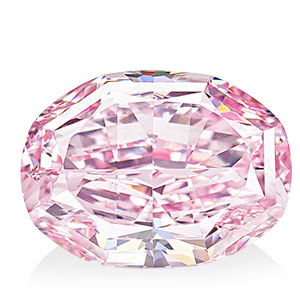 The Spirit of the Rose (pictured), a 14.83 ct. diamond boasting the rare shade of purple-pink, could fetch as much as $60 million when Alrosa sells it later this year.

The Gemological Institute of America (GIA) has graded the diamond fancy vivid and internally flawless, with excellent polish and very good symmetry. It is the largest purple-pink diamond ever graded by the GIA.

Alrosa has not at press time said whether it will be sold through the Russian diamond miner’s own auction process or through one of the big-name auction houses.

The oval-shape stone was fashioned from the Nijinsky, a rare 27.85 ct. piece of rough found in the Siberian province of Yakutia in July 2017. It is the largest pink crystal ever mined in Russia.

The diamond took a full year to cut at the company’s cutting factory. Pink diamonds sometimes require special care, as they have a certain level of internal stress than can cause cleavage. The oval shape was chosen because it accentuated its pink color.

Alrosa named it The Spirit of the Rose after the legendary ballet.

Eden Rachminov, advisory board member of the Fancy Color Research Foundation, gave the $60 million estimate in a statement supplied by Alrosa, noting the diamond’s “beauty overcomes the important pink diamonds sold at auction in the last decade.

“A large fancy vivid purple-pink, internally flawless, with perfect visual characteristics such as this one, enters the market literally, once in a generation,” he said. “The stone has the most desirable pink undertone dispersed perfectly, and looks much bigger in relation to its actual weight. As of today, it is the most important vivid purplish-pink ever unearthed in Russia, and it will enter the books of history as an iconic Russian gem.”

The all-time record price paid for a diamond was $71.2 million, which went to purchase the Pink Star in 2017.