At Sotheby’s, Everything’s Riding On This Tiffany Necklace 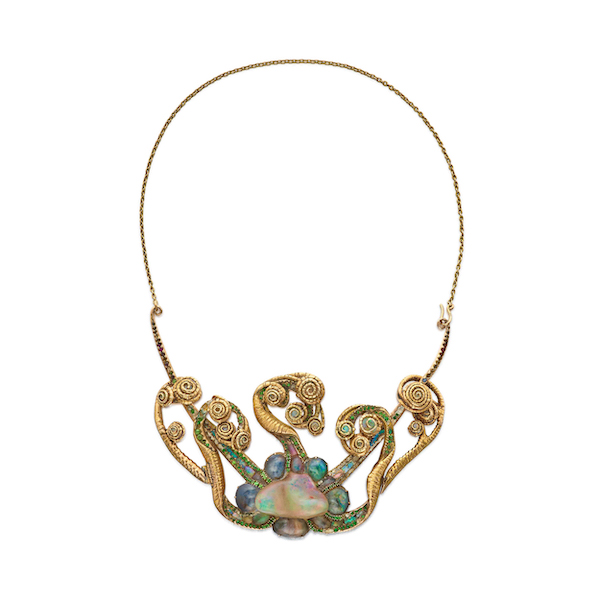 At Sotheby’s, Everything’s Riding On This Tiffany Necklace

Actually, the entire upcoming Magnificent Jewels auction scheduled for Tuesday is kind of a big deal, especially coupled with the many other sales that Sotheby’s is staging throughout December. The goal, according to a press release, is to top $1 billion in sales by the end of the year—a first for Sotheby’s and a record for any auction house.

With such lofty ambitions, the estimate for Louis Comfort Tiffany’s Medusa pendant ($100,000–$200,000) may seem insignificant, compared to, say, some of the auction’s colored diamonds, all slated to fetch in the millions.

But the necklace’s rarity and provenance might tip the numbers well past the threshold.

What we know: The Medusa pendant is one of the earliest jewels designed by Louis Comfort Tiffany, dated circa 1900. According to Sotheby’s, the decorative arts master first began delving into jewelry design in 1902 in preparation for the Louisiana Purchase Exposition of 1904 (aka the St. Louis World’s Fair). A small pamphlet printed at the time of the exposition lists 27 items, including nine brooches, 10 hair ornaments, three necklaces, two pendants, one girdle, one hat pin, and one tiara. Besides the Medusa pendant, only three out of the 27 works from the exposition are known to exist today.

Until the historic pendant landed at Sotheby’s via the Schocken family (of Germany, New York, and Israel), it had a “whereabouts unknown” status. The jewel’s original owner was Henry Walters (1848–1931), a prominent collector and patron of Tiffany throughout the Gilded Age who is thought to have purchased the Medusa pendant in Paris at the Salon de la Société des Artistes Français of 1906.

In 1943, it was sold by Parke-Bernet Galleries (from the estate of Mrs. Henry Walters). It is not known if Salman Schocken purchased the piece directly at the 1943 auction or via an agent, but it has been in possession of the family since then.

And now it’s someone else’s turn to own a piece of history.

“The Medusa pendant was immediately recognizable to me for a few reasons,” Carol Elkins, Sotheby’s senior jewelry specialist, tells JCK. “Over several decades of researching and handling other jewels designed by Louis Comfort Tiffany, I have referred to the various publications on Tiffany jewels where the Medusa pendant is illustrated and discussed. The design of the jewel is so striking and unforgettable that it sticks in the memory banks, and because of the mention of its unknown whereabouts, the hope was always that it would one day reappear.”

“Not all jewels come with such an extensive provenance,” says Elkins. “It might be considered a holy grail of Louis Comfort Tiffany jewels for these reasons.”

Top: John Loring, former design director of Tiffany & Co., notes in Louis Comfort Tiffany at Tiffany & Co. (Harry N. Abrams, 2002), that the Medusa pendant is “more reminiscent of fiddle-head fern shoots and the curiosities of a forest floor after a spring rain than of the fearsome serpent-coiffed head of a Medusa or even of a medusa jellyfish.” Lot 171: Medusa pendant in gold with opals and demantoid garnets, signed Louis Comfort Tiffany. Bids for the live Sotheby’s Magnificent Jewels auction start on Dec. 7 at 10 a.m. ET in New York.