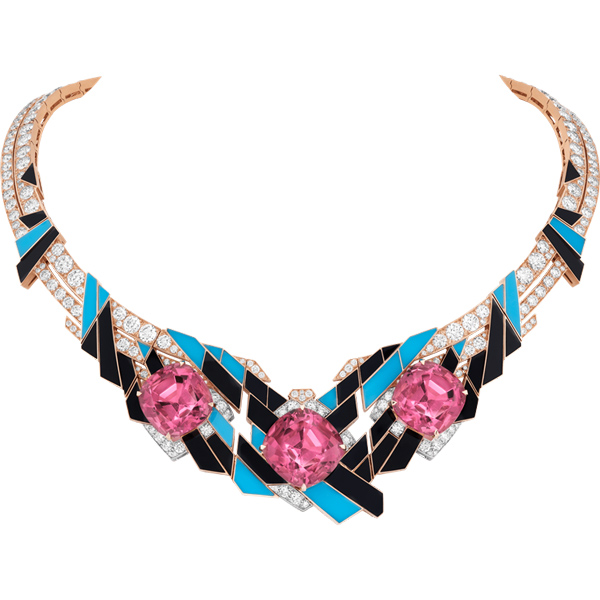 Since 2010 (with the exception of the last two years due to the pandemic), the art and antiques fair Masterpiece in the heart of London’s Chelsea district has been a summer staple. With a mix of galleries and everything from old masters and jewels to luxury boats and sports cars, the show is back this year from June 30 to July 6 and will surely draw visitors just as strongly as before (the champagne bars don’t hurt, either). Ahead of the event, we’ve rounded up some of the most exquisite jewelry included in the show—from contemporary Van Cleef & Arpels to a piece stamped by none other than Picasso’s thumb.

The acorn made its debut in Verdura bracelets, brooches, and cufflinks in the late 1930s. Now, the archival motif has been translated to suit the modern Verdura woman with pieces such as this lariat necklace, which is set with 242 diamonds.

Highlighting openwork scrolls and a center row of baguette-cut diamonds enclosed by brilliant-cut diamonds, these dazzling ear clips by Cartier exude the opulence of the 1930s era during which they were created. It’s considered the golden age of glamour, after all!

Adorned with Burmese rubies, which are considered the rarest and most valuable of their kind, this vintage ring by Suzanne Belperron only gets better with age.

In the 1940s, ballet was a huge inspiration for jeweler Louis Arpels in his designs. And this delicate clip, which was created in 1989, pays homage to the house’s early pieces that forever remain part of its core identity.

Not only was this gold medallion rendered in terracotta by Picasso and cast by his dentist, Dr. Philippe Châtaignier, but it also has the late artist’s dated signature and thumbprint impressed on its opposite side. The image itself depicts an unbridled bull, an animal that appeared in several of Picasso’s works.

Created in France, Van Cleef & Arpels’ geometric necklace is a contemporary design (from 2020) that’s nothing short of a conversation piece.