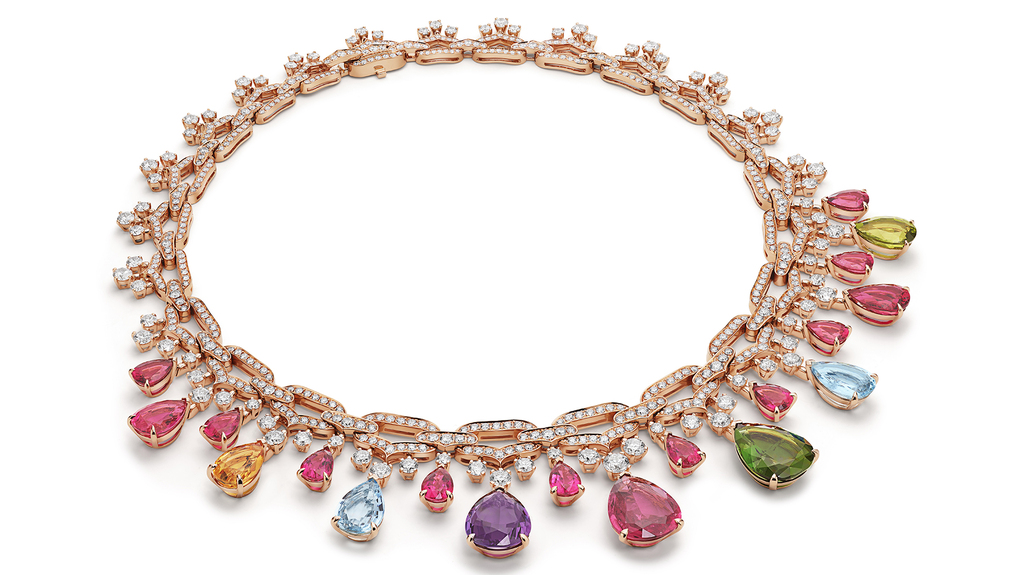 Piece of the Week: The Bulgari Necklace in Taylor Swift’s ‘Bejeweled’ A high jewelry necklace from Bulgari is among the many, many jewels music superstar Taylor Swift dons in her new music video, “Bejeweled.”

A track off her new album “Midnights,” Bejeweled is the singer’s take on the Cinderella story, with Swift in the titular role.

The Bulgari piece enters the fairytale when Swift-as-Cinderella transitions from slovenly maiden scrubbing the floor to bejeweled belle of ball, materializing out of thin air and floating into place around her neck.

Crafted in 18-karat pink gold, the necklace is set with a rainbow of 19 pear-shaped colored gemstones totaling 57.13 carats and over 20 carats of diamonds, a mix of round brilliants and diamond pavé.

The necklace is part of Bulgari’s “Magnifica” high jewelry collection, released in 2021.

On a recent episode of Paul Zimnisky’s podcast featuring JCK News Director Rob Bates, the analyst contends that the volume of jewels in “Bejeweled” could give the industry a boost.

“This is relevant for diamonds,” Zimnisky said. “Someone like this has the power to keep diamonds relevant almost single handedly, given her reach and her influence … Could you imagine if the NDC could afford her as the face of the campaign?”

“That could be a lights-out, game-over situation for the industry … She might be the No. 1 most influential celebrity in the world right now.”

But, as Zimnisky pointed out, it’s actually not the first time the megastar has made a video that was bejeweled.

The video for her 2017 hit “Look What You Made Me Do” featured so much jewelry that author and jewelry historian Marion Fasel wrote a story about it, describing it as a “treasure trove” with “buckets of jewelry.”

In that video, Swift soaks in a bathtub of (probably not real) diamonds while wearing stacks of Neil Lane and wears another major necklace from Bulgari, a gold Serpenti necklace set with more than 10 carats of diamond and 71 rubies.