The Sienna Star, one of the largest fancy vivid yellow diamonds ever to be auctioned. 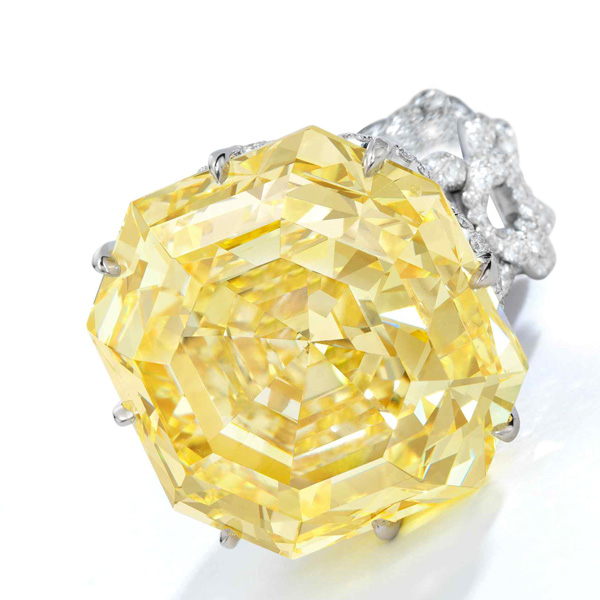 The Sienna Star, one of the largest fancy vivid yellow diamonds ever to be auctioned, is set in a diamond-peppered flexible ring crafted by London-based high jeweler Glenn Spiro. The largest ever sold was the 100.09 ct. Graff vivid yellow diamond, which set a new world auction record when it sold for $16.3 million at Sotheby’s in 2014.

“The absolute scarcity of fine yellow diamonds exceeding 50 carats makes the appearance at auction of this stone a landmark moment in the world of fine gems,” Sotheby’s said of the Sienna Star in a statement.

The sale will also feature important pieces from Cartier, Bulgari, and Van Cleef & Arpels, along with six major jewels that hail from a private collection and are estimated to sell for more than $13 million, with proceeds benefiting an unnamed charitable foundation.

The suite of pieces includes a breathtaking Colombian emerald and diamond necklace by Harry Winston estimated to sell for at least $1.5 million, and a 13.02 ct. Burmese ruby ring mounted by Carvin French that’s expected to fetch between $1 million and $2 million (see both pieces above).

The sale will also spotlight a signed Bulgari ring with a serious center stone: a 25.29 ct. cushion-cut sapphire, which is flanked by two tapered bullet-shape diamonds. The gorgeous ring, pictured below, is expected to nab between $2 million and $3 million.